Sign In or Create Account
Your best 12 months may not correspond to a calendar year. Try our rolling 365 day charts to find your peaks!
Home
Create Shortcut

You will chase a tall, dark stranger!

Try the updated version of this article for more insights into marathon training.

In case you hadn't realised, it's marathon season - and I'm not just talking about the one on the telly - there are at least 30 listed in the Fetch Race Finder this month. And whilst many runners are happy just to complete this challenging distance, there are plenty who are cramming their heads with calculations, extrapolations and dreams of PB glory.

Unless you're the sort of person who turns up to a marathon in tennis shoes and cut-off jeans, you've probably got a good idea of the sort of pace you're able to maintain over longer distances. But until you've gone the whole way, it's hard to know how well you'll finish. Long runs, fuelling strategies and careful preparation all help, but you'll find out plenty about yourself in that final six miles.

This article came about because I was always bemused by the predictions that I got from pretty much every online "Calculate Your Marathon Time" tool. I ran my best half marathon in 1hr46, and most calculators suggest a corresponding marathon time of 3hrs40. My best attempt is 4hrs15. It was a wonderful experience, but I've always wondered where I lost the extra half an hour. I don't remember stopping for a haircut.

My training could have been a bit better – but it made me wonder whether the race time predictors are giving us a realistic view of what we'll achieve. How many runners set out to achieve those predictions, and end up having an awful race? Ultimately, predictions help set our expectations and inform our plans – so it makes sense to ensure they are good ones.

The Fetch database holds over 30,000 marathon and 57,000 half marathon performances – enough to expect to find some sort of relationship between them. There were red herrings of course - like folks who have run a great time at a flat half, then slogged their way around Beachy Head Marathon. But by concentrating on runners who had completed at least five half marathons and five full marathons, I found a core of a thousand runners who (you'd hope) would have recorded a representative time at both distances. They range in ability from five-minute milers all the way down to twelve-minute milers.

In 1977, Peter Riegel published an article in the US edition of Runner's World that introduced a formula for estimating race times – and it is this formula that is most commonly used in dozens of race calculators all over the internet. You can feed one race time into it, and get a prediction for how fast you'd run at a different distance. It's pretty awesome, because it can apply to pretty much any distance between one mile and a marathon – and in most cases, it gives a decent estimate. Here it is:

So if you ran a half marathon in 1hr45 (105 minutes), and wanted to predict your marathon time, you'd fill it in like this:

And there's that prediction that left me bemused – a whopping 14% quicker than I managed. But am I alone in that feeling of slight implausibility? Well, no – at least not judging by the data. Allowing a generous 5% margin of error (that's nearly half a minute per mile for a four hour marathoner), this formula got it wrong for 65% of the runners in my data set.

Let's be clear. I'm not saying that there are bad sums at work here. Far from it, I think this is a very adaptable and elegant formula, and I'm sure it was a good fit for the data that was available to Riegel in 1977. I'm in a very fortunate position with access to so much data from runners of all standards. Riegel's formula is also probably a good fit for those of us willing and able to put EVERYTHING into our training. These days we all have busy lives, what with family and work and telly.

What I'm aiming to do is not to invalidate, but to enhance this formula – to make it work for all of us, and to give us something achievable to aim for. Sure, this may even mean that you exceed your targets – but I think that's better than never reaching them.

Take a look back at the formula. The 1.06 is important - it represents the rate at which we slow down as the races we run get longer. If it was a nice round "1", it would mean that we could run a marathon at the same pace we would run a single mile. If it was as high as "2", it would mean that Roger Bannister in his prime would take nearly two days to run a marathon. The higher the number, the more we end up slowing down as distance increases.

Elite runners are capable of less than 1.02 in the transition from half to full. Paula Radcliffe ran her best half marathon at 5:06/mile, and her world record marathon in London 2003 was 5:10/mile.

I fed all of my 1071 runners through that formula, and found that only 49 of them managed to hold on to the tails of 1.06 – it was far more common to see a score of 1.15. So if we adjust our formula to look like this (for half marathon to marathon only):

we see an instant overall improvement. The number of bad predictions drops from 65% to just 27%.

But let's not stop there! We know that faster runners tend to be capable of holding on to their pace for longer. So instead of using a constant 1.15, let's connect that number to the speed of the runner, using their half marathon time.

I also looked at the differences between male and female performances. We all accept that the fastest men generally beat the fastest women, but you might be interested to know that if a man and woman can both run a 90 minute half, the woman is likely to beat the man by nearly four minutes over marathon distance. That difference gets bigger as pace reduces – women capable of two hour half marathons can look forward to beating their male equals by nearly 9 minutes in the marathon.

Taking these factors on board, along with plenty of medication, I've built a new calculator that will predict your marathon time based on your half marathon. It should predict your time to within 5% in 77 out of a hundred cases.

Of course, it's just a prediction, and within each prediction there's leeway, and plenty of people who stray from the norm. It's based on averages, and as a runner you are anything but average. It doesn't take into account anything that happens on race day, and it doesn't know anything about how hard or effectively you trained. And therein lies the real secret towards converting a good half marathon time into a great marathon experience.

Click here to get a prediction of your marathon time! Try The Calculator
Enter your half marathon time here: 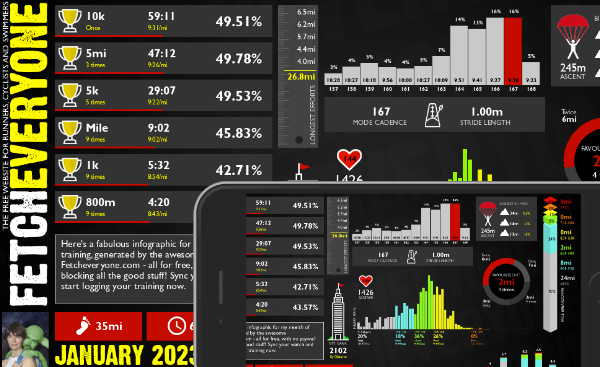 A brand new shareable infographic showing a colourful breakdown of your training month.

Fetcheveryone lets you analyse your training, find races, plot routes, chat in our forum, get advice, play games - and more! Nothing is behind a paywall, and it'll stay that way thanks to our awesome community!
Get Started
Click here to join 109,912 Fetchies!
Already a Fetchie? Sign in here