At some point before the end of the year, I'll log my 4000th mile on Fetch. And although I'll never top the training league, that's still quite a long way. More to the point, it represents a big chunk of my life.

So I've been wondering: what have I learned? If I could go back and share one piece of advice with myself as a beginner, what would I be?

Well, Fat Dave (2006), pull up a chair: we need to talk about that hill. You know the one. The hill that frightens you. The hill that's your nemesis. The hill you try to avoid, but somehow always seems to put itself in the middle of your running routes anyway.

It's OK to have a hill like that. I'm sure everyone does. But since you keep bumping into it anyway, I'll give you a few home truths that might make you feel a bit better next time that particular hill looms into view. Here's the first one...

You know that thing about a spider being more afraid of you, than you are of it*? Hills are exactly like that.

That clench you get when you're nearby is the hill's first – and best – defence. If you let it, that sense of impending doom can really start to overshadow your run, and end up being much worse than the climb itself. Then, because your confidence is undermined, you don't give it 100%. It's self-fulfilling.

And the dumb thing is, there's no need.

You, and not the hill, have the power. The fear you get when the hill is close is nothing compared to the tremor it ought to feel when it hears your footsteps approaching.

Why? Well, listen. I'll let you in to another secret...

The hill has not been invented that will not – eventually – be beaten by lots of small steps and a good dash of bloody-mindedness. Keep moving onward and upward, and sooner or later the hill will go away.

(I'm no guru on running technique but since you asked: try short, quick strides, like changing down a couple of gears in a car. Use your elbows and KEEP GOING.)

People tend to say: keep your head up, and fix your gaze on the top of the hill. But the hill's not going anywhere, why focus on how big it is? I take care of my part – keeping going – and, even if I need to walk, I'll get to the top eventually. It's just a matter of time (and being a bit stubborn).

No, that hill isn't so scary.

And I'll tell you what, when you understand that, you'll go and seek it out from time to time. Really, it's true! Here's why...

"Be kind to yourself; you won't lose fitness that quickly."

"You haven't put on weight – you look great!"

"You're running so well lately."

Wondering whether your friends really mean it, or if they're just being nice? Go run up that hill.

The hill doesn't care if you've had a lot on your plate. It's not going to go easy because you're coming back from injury. It will simply give you a fair, unbiased account of exactly where your fitness is at. No argument; no debate.

And that's a good thing, because it works both ways. A lot of the time, the hill is the place you'll first notice your progress.

Sometimes, the hill says you're fitter than you thought you were. And because it doesn't lie, you have no option but to accept the compliment.

Can't run it in one? There's no shame in that. But notice where you are when you stop running, and lock it in your mind. If you can, actually touch a tree or a lamppost. That's your marker. Next time, you'll know how much better you're getting.

Everyone knows hill training makes you stronger. Some say it's speed training in disguise. But that hill – THAT hill – will improve your running in a different, and more important way.

It will help you believe in yourself.

Deep down, that hill is your friend. 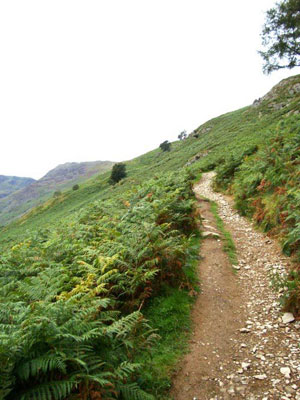 Dave's hill wasn't available for comment, so we're using this stunt hill to provide the necessary drama. Thanks for the pic Mikuro.

When he's not plodding round the wilds of Cornwall, Discovery Dave (formerly known as Fat Dave) runs Lungfish, a marketing copywriting agency. He also has a mildly entertaining blog about writing, marketing and PR.
* Ironically, and contrary to conventional wisdom spiders are NOT afraid of you. They are cold, soulless killing machines that would eat you and everyone you hold dear in two seconds flat if they could. The fact they haven't done so already is only because they haven't worked out how. But hills are not like that. Trust me.