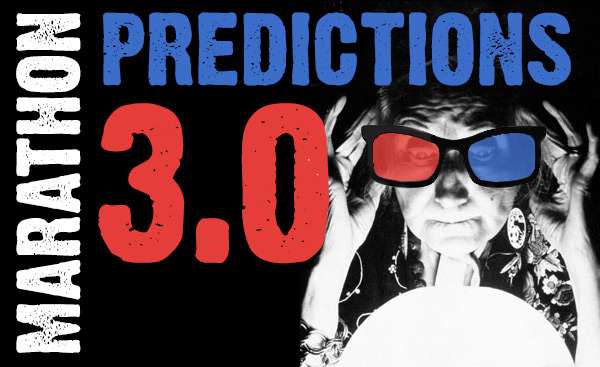 
It was a real pleasure to see my marathon time predictor featured in The Guardian a few months back. My algorithm uses data from over a thousand runners of varying abilities who have logged their training here on Fetcheveryone, to come up with a better prediction of marathon time. You can try it here.

It's based on my view that the usefulness of the popular formula devised by Peter Riegel in 1977 starts to break down at marathon distance. This may well be because runners are often under-prepared for the rigours of the marathon, but it's arguably better for morale to smash a realistic goal than to burn out chasing an elusive one. Here is Riegel's original formula applied to predicting marathon time from half marathon:

Marathon time = (Half marathon time) x 2R
A low value of R implies that runners can hold their pace over the longer distance, whilst higher values indicate the need to adopt a more conservative pace at marathon distance. The value of R is never less than 1, as that would imply that runners can complete marathons at a faster pace than half marathons, which makes no sense.

Riegel's classic formula uses R=1.06, which still provides excellent predictions for most distances even 40 years later – but out of 1071 marathon runners in our sample (all of whom had completed at least five half and five full marathons), less than 5% managed a time that kept up with Riegel's predictions. The rest fell short.

Here's another way of looking at the data. If we know a runner's marathon and half marathon time, we can work out what value of R they achieved. The following graph shows the number of runners who fall into each possible value of R. For Riegel's formula to work for everyone, we all need to be in the 1.06 column (shown in green), but the reality is that we see a wide range of results, and the majority are to the right of 1.06 i.e. slower than Riegel's prediction. 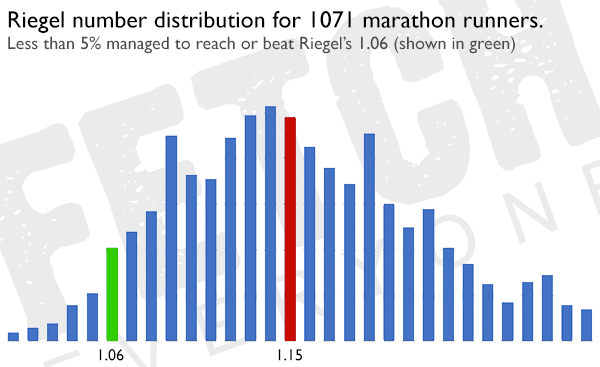 Our predictor scraps the 1.06 in favour of R=1.15 (shown in red), in the sweet spot at the heart of the graph – which instantly means that our predictions are more likely to match most runners, generating more realistic and achievable goals to aim at.

But by tuning our predictor to the middle of the data, we are left with a situation where half of all runners have a very real chance to beat that prediction – and some of those who did were keen to suggest that they'd obviously done things properly! And there's probably at least some truth in that.

Here's where things get interesting. We can use our red line to create two groups. To the left, the runners that converted their half marathon time into a relatively good marathon time; and to the right, those that did less well. I refuse to say 'badly', because that's not much fun to read if it applies to you – and anyone who's capable of running a marathon is already awesome. Fact!

Let's see if we can identify any traits amongst those who beat the red line to apply to our own training to get us closer to our goals.

Whether it does or not, it's not something you can train for – but it's still interesting to look at. And here's one in the eye for gender equality - female runners are BETTER at converting their half marathon times into the full marathon. In short, if a male and female runner have identical half marathon times, the female is likely to have a better marathon time. Just under half (48.5%) of our males beat the red line, compared to 55.2% of females.

I also looked at whether running speed had an impact on ability to convert from half to marathon. Would a 1hr20 half marathoner fare comparatively better than a 2hr half marathoner? Unfortunately for those of us who are further back in the field, it does look as though there's a bit of a trend here. 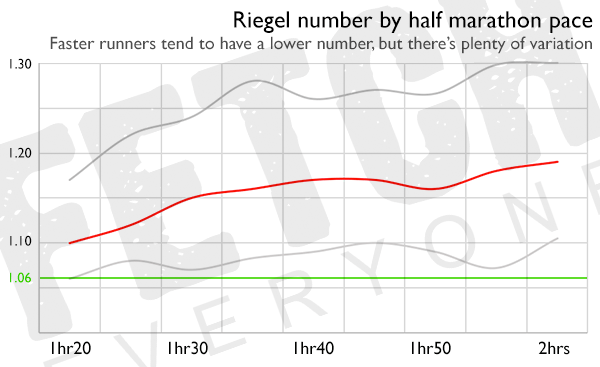 Runners in the 1hr20 bracket can hope for R=1.10, whereas 2hr runners will be better suited to using something more like R=1.19. But the red line just shows the centre ground - the two grey lines on this graph show the variation that was present in the data. 10% of our speedy 1hr20 runners managed R=1.06, but conversely 10% of them could only manage R=1.17 – and amongst the slower runners, there were some impressive conversions.

I took gender and pace into account in my original calculator – so these are nothing new. It's time to dig a bit deeper.

What about training mileage?

You can run the best half marathon of your life, but unless you extend your long runs and plan carefully, a marathon will eat you whole and burp out your shoelaces. Mileage is the most basic measure of marathon preparedness, and therefore a good place to start.

Several years ago, I looked at the typical mileage that marathoners do during the 16 weeks before racing. I've refined this a bit over the years, firstly to look at only PB attempts (some people churn out marathons like they're shelling peas); and secondly to look beyond the first few attempts (which are often more about learning how NOT to run a marathon). The resultant graph looks like this: 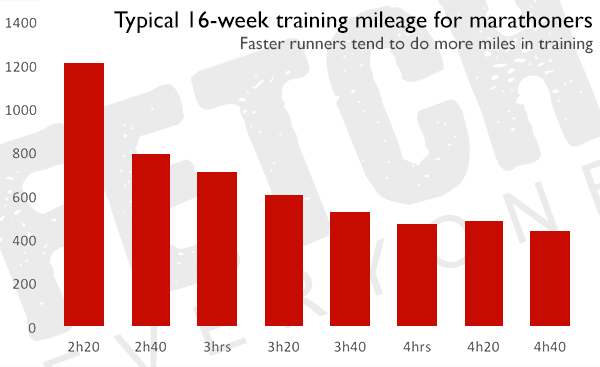 This gives us an (admittedly floppy) yardstick to measure our predictions against. We can predict times for all our marathon runners, and calculate whether they met the mileage requirements set out in the graph above. We might expect to see that those who complete the mileage requirement tend to be better converters. 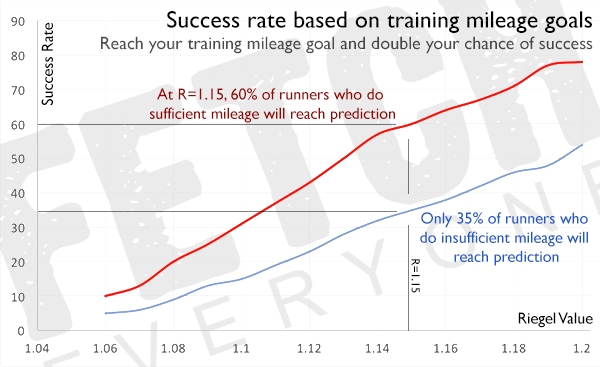 The red line on the graph shows the success rate of runners who met or exceeded the mileage target; and the blue line shows the success rate of those who did not. At R=1.15, 60% of our sufficient-mileage runners reached the predicted time, compared to only 35% of those who did less mileage. In fact, at every value of R, from the very tough R=1.06, right through to a kind R=1.20, those who put the mileage in did better. It's a dance as old as time.

What about long runs?

In 16 weeks, you can run 500 miles by running 4.5 miles every day – but it doesn't sound like the ideal marathon preparation. There's a long-standing rule of thumb that says your five longest runs (5L for short) should add up to 100 miles. This is pretty useful, although our data suggests that quicker runners tend to average a little bit more: 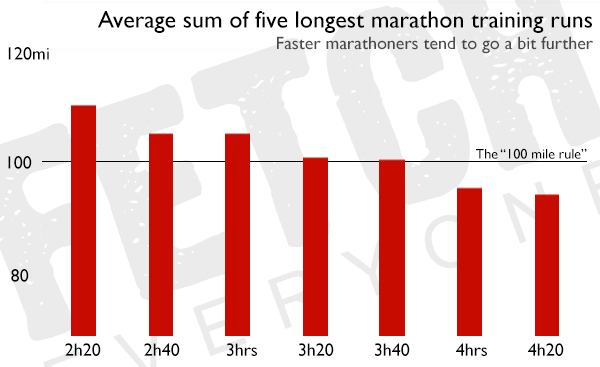 Now let's look at how 5L helps us refine the prediction: 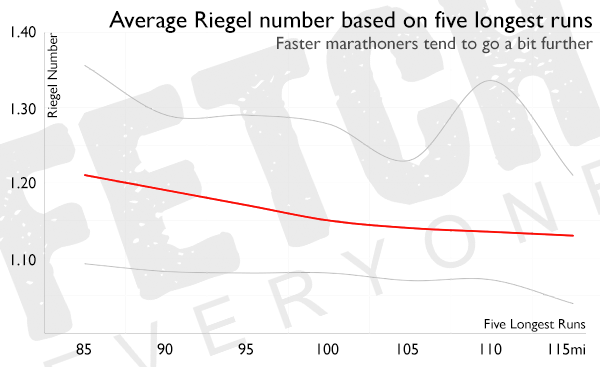 The red line suggests that the value of R gets lower as 5L increases. Those running 85 miles might expect R=1.21, whilst those running 115 miles will typically see R=1.13. However, there's plenty of variation. 10% of our 85 milers managed R=1.09, and conversely, 10% of our 115 milers only got R=1.21 – so although long runs are an extremely important part of marathon training, it's clear they are not a silver bullet. But then you knew that, right?

There's also a tendency amongst better converters for the five longest runs to occupy a smaller percentage of your overall mileage. Here we see that for a R=1.06 runner, 5L is about 9% of the 16 week total; but for R=1.18, it's more like 22%. A successful conversion to marathon relies on a well-rounded training programme that doesn't rely solely on long runs. 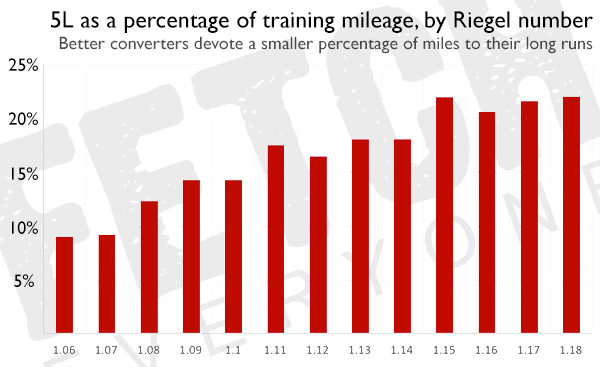 What about training pace?

Comparing average training pace to marathon pace reveals an interesting perspective. Runners who achieve six-minute miling in their marathon will typically run over a minute per mile slower than that (72 seconds if you must know) across all their pre-race training. But a runner who ends up with a 10-minute mile marathon will actually average slightly faster than 10 minute miling in training. 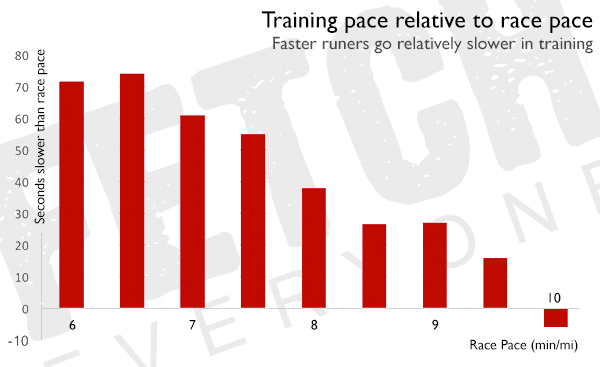 Could this prove relevant? Do more successful runners tend to save all their effort for racing? Does a relatively easier training regime help tune up your fat-burning systems for the long slog? Let's see what our data shows. 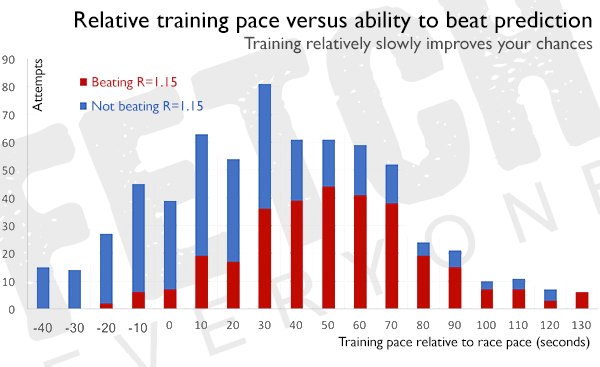 Earlier on, we discovered that quicker runners were more likely to beat the R=1.15 prediction, so to be fair we should look at the success rate for runners further down the field in isolation. I know from experience that sometimes it's difficult to slow yourself down – and surely if you can train at a particular pace, you can race at it, right? Well, still no, sadly. Within the slower half of our field, only 10% of runners who trained quicker than race pace were able to hit our R=1.15 prediction, whilst 56% of those who stayed 30 seconds or more slower, were able to reach the target. Including slower runs in your training will help your body adapt to use more fat as fuel, which will help your endurance, and push back the wall.

Tapering for a marathon can be excruciating. Just at the point where you feel like things are coming together, when all those long runs are making you feel just a little bit invincible, the coaching manual says to back off. It's time to rest those legs, and give your body a chance to charge its batteries, and make its final adaptations to the training peak. In our sample of runners, the majority did their highest mileage in week 13, leaving the traditional three week taper. 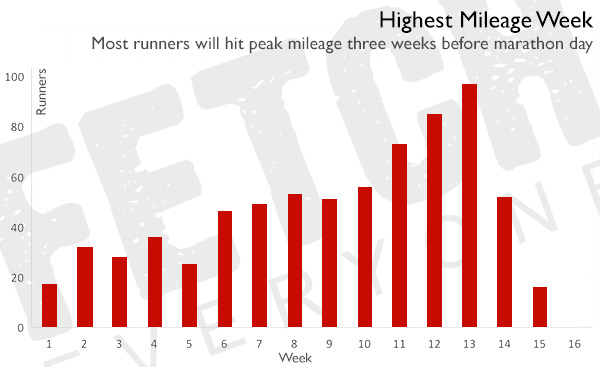 And here's how the typical three-week taper compares to the maximum mileage week, expressed as a percentage. The first week (T1) is 70%, dropping to 58% in T2, and 34% in T3. 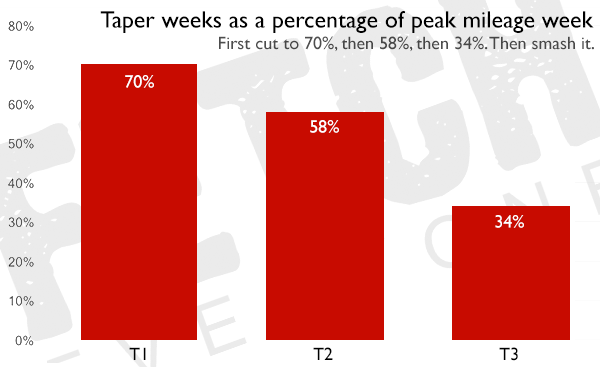 Although individual approaches varied, there was no discernible tactic that led to better conversion; and fast and slow runners were equally likely to take some form of taper. Just enjoy the rest (and the madness!)

A summary, and a view of the future

Hopefully this analysis shows you that there's no one trait that will guarantee you marathon success, but several rules of thumb that come together to give you the best chance. A good training plan needs sufficient mileage, suitable long runs, and sensible effort levels that target the different energy systems in your body. Pushing yourself as hard as you can is for Hollywood montages, not for real-life training.

This article will develop over time, and it's my aim to incorporate the findings into our prediction tool. Individually, the sections above might help you to see the benefit of certain aspects of training - but it would be great to bring everything together to provide predictions that are as individual as you are. And therein lies the final and most important bit of guidance. Our charts and numbers obscure all that individual awesomeness that make you who you are. So if you are someone who does things differently, stick with it.

Please leave your comments and suggestions below, PLEASE share fetcheveryone.com/marathonprediction with your running friends, and please keep logging your training with us. Thanks for reading!

Fetcheveryone lets you analyse your training, find races, plot routes, chat in our forum, get advice, play games - and more! Nothing is behind a paywall, and it'll stay that way thanks to our awesome community!
Get Started
Click here to join 109,561 Fetchies!
Already a Fetchie? Sign in here