You've done the training. You've rested up. You've worked out the optimum safety pin strategy to minimise wind resistance. Now all you need to do is to decide what pace to start out at. This article looks at the pacing of real runners, to help you develop a realistic strategy for race day.

If you enjoy this article, please help us by sharing fetcheveryone.com/marathonsplits with your friends.

Most articles I write on Fetcheveryone come about because of something that went a bit wrong. Abingdon Marathon 2018 was my fourth marathon, and I would have been delighted to get round with an average pace of just inside 9:44/mile for a slender PB.

Arguably the cracks were showing in Q3, but maybe I'd created the problem earlier on by running the first half a bit too fast. And before we push on, it's worth noting that I was not just 'tired', but also feeling quite a bit of pain caused by a tight IT band. But this slow-down raises a few questions:

We have lots of data on Fetcheveryone. As I write, 6561 Fetchies have recorded a marathon time in their Race Portfolio. But in order to make our data as relevant as possible, let's focus on the following subset of performances:

This gives us 695 performances from runners who were giving it their all, with a reasonable amount of distance racing experience. Their times range from a 2:28 marathon down to a few six hour plus performances. Surely all these fine specimens would churn out negative splits! No. Only 23 (3.3%) of our runners managed to do this. The next graph shows the number of runners completing a negative split (to the right of the green bar), and a positive split (to the left). For example, 98 runners did the same as me, taking 47% of the time to run the first half of the race, and 53% of the time to run the second half. 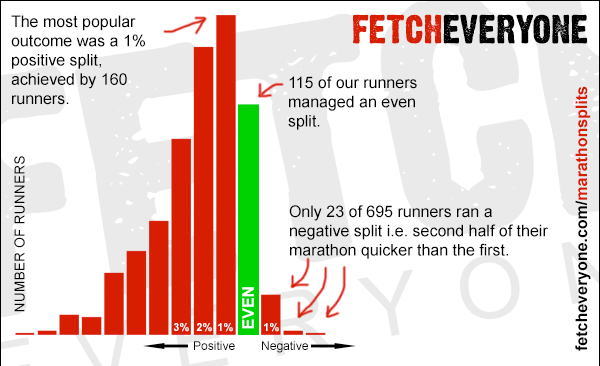 Do we see better management of the two halves of the race from our faster runners? Yes. This graph shows our runners broken down by marathon time, and the median time spent negotiating the first half of the race. The faster runners are closest to achieving the negative split. 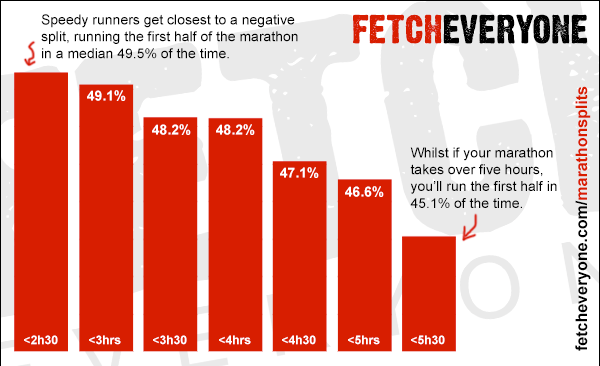 Let's consider the early pacing strategy. For each of our runners, I calculated their average long run training pace from their five longest pre-marathon runs. I wondered whether a big difference between long run pace and starting pace in the marathon would result in the biggest crash and burn.

This graph illustrates the number of runners and the pace they run the first quarter of their marathon. The bulk of runners set off between 5% and 20% quicker than their average long run pace. 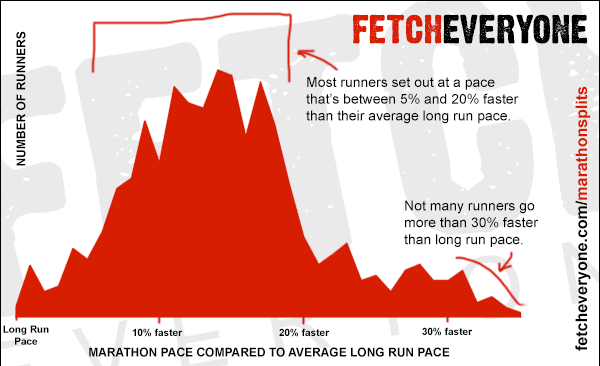 Next I looked at whether choice of starting pace has an effect on the overall race outcome. For each runner, I calculated their pace in the first quarter (relative to their long run pace), and plotted this against outcome pace. The red line on the following graph shows each potential starting pace. The black dots show the median outcome pace for runners who started out at each pace. If negative splits were common, we'd expect to see at least some of those black dots below the red line. 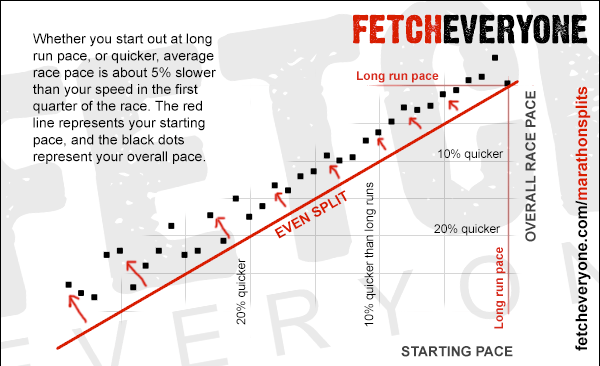 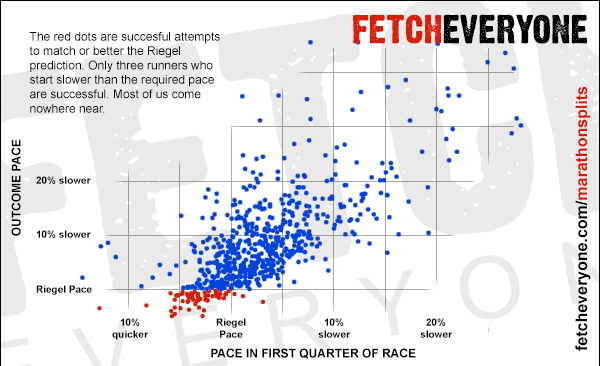 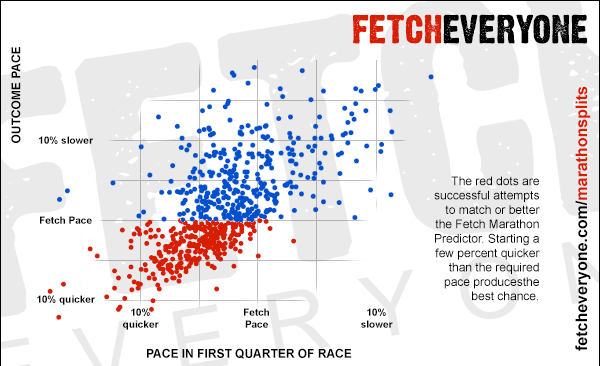 Throughout this article, the data suggests that the vast majority of us should expect to slow down in the latter stages of a marathon - so IF you're desperate to achieve a time, it's worth contemplating a pacing strategy that takes this into consideration. But we're talking a percentage point or two here, and definitely not a crash and burn approach. The following table shows the paces you'd need to run a 49-51 positive split i.e. 49% of your time in the first half of the marathon, and 51% of your time in the second half. It's a delicate trade off between putting a few seconds in the bank here and there, and setting yourself up for a big L.

And just remember that the longer your race, the more opportunities there are for something to go wrong. A niggle can turn into an injury. A poor fuelling strategy can turn into an energy shortage. A negative thought can talk you out of believing. And there's stuff you can't control, like the weather.

None of our data takes into account any changes in terrain, hilly profiles, or those little moments of chance that can change your day. If there are big hills, off-road sections, or a midday weather forecast that you could fry an egg on, adjust your plan accordingly. Segment the race your way. Use our Pace Band Creator as a starting point, or make your own.

Ultimately, for all but the elite runners, time is not as important as having a good experience, and coming home safely. There's no shame in walking. There's no shame in stopping. Getting to the start line is way more than most people ever do. Don't be in too much of a hurry to leave it behind. Good luck!

If you enjoyed this, please help us. Share fetcheveryone.com/marathonsplits with your friends. 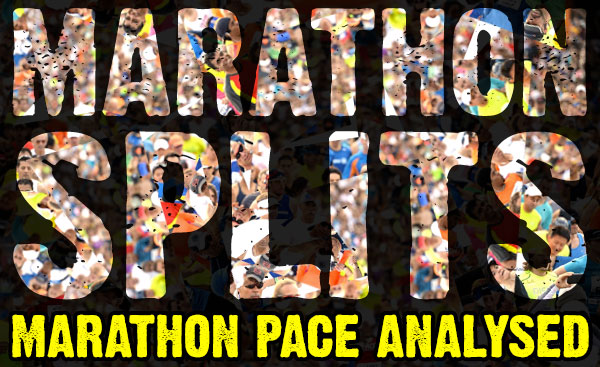